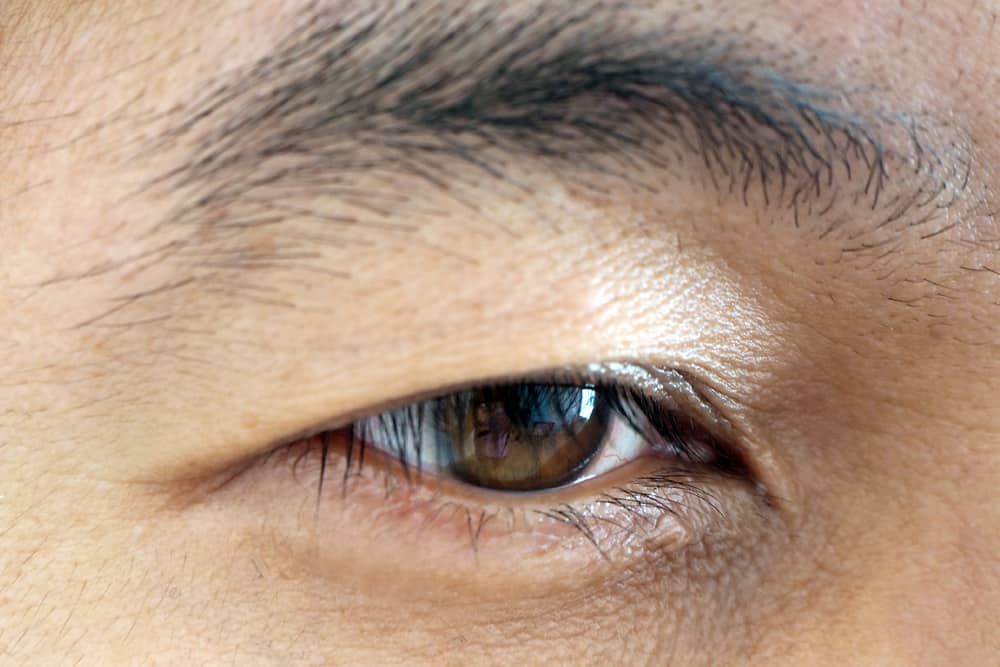 As we age, our skin’s laxity increases and everything starts to sag — our eyelids included. This effect is known as ptosis, blepharoptosis or droopy eyelids, which can be corrected by droopy eyelid surgery.

Contrary to popular belief, droopy eyelids may not only be caused by old age, but also by a variety of other factors such as genetic disposition (congenital ptosis) or acquired through contact lens wear, eyelid infections or continuously rubbing our eyes. Severe ptosis may also lead to vision impairment. That being said, in many cases, ptosis is idiopathic, which means a definite cause often cannot be found.

Whether it is for aesthetic purposes or to help with your field of vision, ptosis correction is a common outpatient procedure to consider. In this article, let plastic surgeon Dr Samuel Ho, walk you through and answer some frequently asked questions you may have about droopy eyelids and ptosis correction.

How do I know if I have droopy eyelids?

Symptoms of ptosis include upper visual obstruction, headaches, forehead lines, upper eyelid asymmetry, eye size asymmetry and a sensation of heaviness and fatigue after long hours of computer work or at the end of the day.

If you suspect you have ptosis, it is paramount that you consult your doctor for a proper diagnosis, as it may be indicative of an underlying medical condition. In this case, you may be able to treat the ptosis without undergoing an eyelid correction procedure.

Are there any non-surgical alternatives to droopy eyelid surgery correction?

Unfortunately not. The non-surgical alternatives often do not work or they only work for a very short period of time. Eyelid tape, glue, false eyelashes and coloured contact lenses all serve to mask the issue initially, however, eventually make the problem worse through a vicious cycle of exacerbating the skin laxity and eyelid muscle tendon damage.

Will people be able to tell that I've had droopy eyelid surgery?

Ptosis surgery aims to correct the eye droop and the resultant smaller eye size/aperture. It also seeks to reduce the symptoms that are listed above. As such, you will have larger sized eyes that look much less sleepy or asymmetrical in some cases.

The naturalness of the surgery is then dependent on the eyelid crease that is chosen; typically a lower height or thickness appears more natural as does a tapered shape crease as compared to a parallel shape.

Will I have asymmetrical eyes after a droopy eyelid surgery?

The risk of residual asymmetry is around 10-20% [1] and can be corrected with a simple touch up surgery, which is generally performed 1-2 months after the original surgery to allow for resolution of swelling, which is the chief cause of initial asymmetry.

Having said that, there is no perfect symmetry between both eyes as factors are affecting the size, such as the globe size, the bony orbit size and the muscles around the eye. In fact, most people are born with slight asymmetry between the left and right eyes.

How bad will I look after a droopy eyelid surgery?

Initially, you would expect some bruising and swelling. The bruising usually lasts between 7-10 days and will gradually fade from a patchy purplish colour to green, then golden yellow before disappearing. The swelling or puffiness takes longer and depends on the age group of the patient, with older patients generally taking longer to resolve. The average patient takes 1-3 weeks for the swelling to completely resolve.

The double eyelid crease will also not look natural at the start, being very deep and high, which is normal. As the swelling solves and the skin relaxes over the incision, the double eyelid crease will soften out and take on a more natural curve. It will also look less deep/ defined due to the relaxation of the internal scar tissue. This can take anywhere between 1-3 months to occur.

Is it possible to perform droopy eyelid surgery on only one eye?

Yes, I do that for around 25% of my patients. However, I have to ensure that the ptosis is truly one-sided; often it can be masked (Herring’s effect), where the more severe eye appears droopy but because of compensation on both eyelids, the less severely droopy eye appears normal. [2] A simple clinical examination can exclude this. If there is asymmetrical ptosis in both eyelids, then both eyelids should be corrected at the same time.

What happens when I'm not happy with the results?

There are usually two reasons for this -- either with regards to the double eyelid shape/height or with the symmetry of the eye size. If it is a problem with the eye size symmetry, a simple touch up procedure can be performed to tighten the smaller or more droopy eye. This takes about 20 minutes and can be performed under local anaesthesia.

On the other hand, if it is an issue with the double eyelid crease shape or height, then it would depend on what needs to be adjusted. If the height needs to be increased due to excess skin, then the procedure to remove that extra bit of lax skin is a simple one that can also be performed under local anaesthesia.

Will there be a scar after droopy eyelid surgery?

Initially, a pink-coloured scar, where the incision is made, can be seen when the eyes are closed. Over a period of 1-3 months, this scar will fade into a thin skin-coloured line along the double eyelid crease. Keloids generally do not occur in the upper eyelid. [3]

How long does it take to recover from a droopy eyelid surgical procedure?

The wound typically heals in 4-5 days, after which, the skin sutures are removed. After a week, light upper eye makeup is allowed, as is the use of contact lenses.

However, strenuous exercise, contact sports, swimming, eyelid extensions and false eyelashes have to be delayed till 1 month after the surgery. This is to allow for the internal wounds to heal and for the internal repair to be stable. Early return to any of these activities risks loosening the ptosis repair prematurely.

Will the recovery period be painful?

No, most patients will only feel an aching, swollen or tight sensation. There should not be any significant sharp pain after the procedure. Many of my patients do not take painkillers after the first day.

Are there any post-procedure tips after droopy eyelid surgery?

Yes, avoid strenuous activity and do the cold compress diligently. After the first week, I usually tell my patients to switch to a warm compress, which really helps with the bruising and swelling resolution.

Also, I find a significant difference in the recovery process between my patients who use Sinecch anti-bruising medication as well as scar gel and my patients who do not.

Can ptosis be treated with double eyelid surgery?

Ptosis is treated with a form of double eyelid surgery; it falls under upper blepharoplasty. The double eyelid creases that form are a bonus of ptosis surgery, although there is an option to do without. The two, however, should be not treated as the same because ptosis surgery is a far more technically complex upper eyelid surgery that seeks to treat a medical condition.